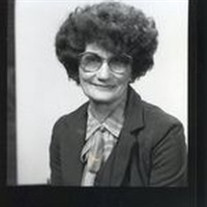 Waldene Hines Terry, 93 passed away on January 25, 2010 in Medford, Ore. She was born in Calloway, Neb. on October 1, 1916 to Lloyd and Mabel Gordon Hines. She was reared on the Gordon Family Homestead in Nebraska until the 1927 Dust Bowl. At that time, the family made a six week trek west via a Touring Model T, visiting many soup kitchens before arriving in Los Angeles, California their new home. Waldene graduated from Freemont High School in 1935. She was a very accomplished violinist and was the 1st chair in the Los Angeles Junior Symphony. Waldene went to school as a dress designer and as her mother, Mabel Hines, worked in the dress sewing business. She enjoyed ballroom dancing, which is where she met her future husband, Delbert Terry. They married in October 1938 and relocated to the Terry Family Ranch in Williams, Ore. This was a tremendous change for the Los Angeles city girl tomo to the country farming life. She was very active in the Williams Grange and taught clothing design and sewing to many community members, including the 4H youth. In 1958, the family moved to Medford, Ore., where Delbert established his race horse training and breeding business. Waldene became a Jackson County employee, starting as a clerk in Judge Loren Sawyer's office. She then moved to the County Clerks Office as an election supervisor and finally as a Jackson County Clerk, she retired in 1983. After retirement to her Medford farm, she bred and raced many horses. She also spent much of her time dancing (both clogging and square dance) and volunteering with the Rogue Federal Credit Union. She is survived by her son, Marvin Terry of Grants Pass; daughter, Roxanne (Rich) Terry McGoven of Missoula, MT; Grandchildren: Katrina (Chris) Terry Kean of Madras, Ore.; Mason (Kathy) Terry of San Francisco, CA; Karisa (Ian) Terry Buvit of Ellensburg, WA; Justin (Lindsey) McGoven of St. Paul, NC and great-grandchildren: Ajia and Olive Buvit, Austin and Logan McGoven and Gabriel Kean. She was preceded in death by, her parents Lloyd and Mabel Hines, brother, Mitchel Hines and husband, Delbert Earl Terry. A funeral services will be held at 2:00p.m. on Saturday, February 13, 2010 at Memory Gardens Chapel

Waldene Hines Terry, 93 passed away on January 25, 2010 in Medford, Ore. She was born in Calloway, Neb. on October 1, 1916 to Lloyd and Mabel Gordon Hines. She was reared on the Gordon Family Homestead in Nebraska until the 1927 Dust Bowl.... View Obituary & Service Information

The family of Waldene B. Terry created this Life Tributes page to make it easy to share your memories.

Send flowers to the Terry family.