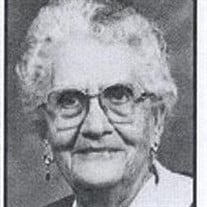 Verda May Vinzant, 98, died at Edgewood Foster Care Home on Monday, February 21, 2011. She was born on July 10, 1912, in Edgemont, S.D., to Joseph Frank Deister and Delia Amanda. On December 6, 1930, Verda married Homer Allen Vinzant. She lived in Osage, Wyo., before moving to the Rogue Valley 62 years ago. Verda worked at Rogue River Cannery and later Harry & David, as a cook, from where she retired in 1974. Verda was a member of Olive Rebekah Lodge for 60 years; the Reams Eastern Star; and the Medford Senior Center. She will be especially remembered for her sewing, embroidering, and many other handwork projects. Verda also loved the outdoors, gardening, camping and later, traveling around the United States with her husband in their motor home after retirement. After her husbands death, when Vera was 88, she bought her first computer and became competent enough to send emails to family and friends. She also continued her travels by going on cruises with family. Verda is survived by her daughters, Jean Frick, Alice Miller and Diana Meyer; son, Robert Vinzant; 11 grandchildren; 23 great-grandchildren; and 21 great-great-grandchildren. She was preceded in death by dughter, Rose Marie; two brothers, Harold and Ray Deister; a sister, Sadie Squire; and granddaughter, Cindy Phillips. Verda will be remembered as a loving wife, mother, grandmother, sister and a true friend. Her family and friends remember her unconditional love, ever-present smile, and sense of humor. Verda will be greatly missed by those who had the privilege of knowing her. Special thanks to Debbie at Edgewood Foster Care Home, and Providence Hospice for their loving care. A service will be held at 11:00 a.m., on Friday, March 4, 2011, at Memory Gardens Mortuary. Entombment will be in Memory Gardens Memorial Park. In lieu of flowers, memorial contributions are welcome, and may be made to Providence Hospice, 2033 Commerce Dr., Medford, OR 97504; or Community Bible Church, 500 N. 10th St., Central Point, OR 97502.

The family of Verda May Vinzant created this Life Tributes page to make it easy to share your memories.

Send flowers to the Vinzant family.