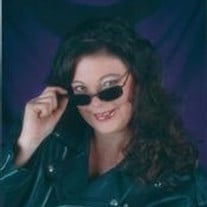 Terri Lynn Brown passed away Saturday, August 25, 2012, at 12:43 am at OHSU in Portland, Ore., after fighting a serious illness for five years. Terri was born in Pasadena, Calif., November 14, 1960, to Eugene Brown and Betty Bell. As a young woman, Terri had lived in many states including California, Arizona, Nevada, Illinois and South Dakota before finally making roots in Central Point, Oregon where she met the love of her life, Bill. However, Terri was a free spirit and occasionally the wind would blow her to South Dakota to run with her horses. She was very, very proud of her Indian heritage, which led her to collect many Indian ceremonial pieces and artifacts, including necklaces, peace pipes, pictures, arrowheads, paintings, healing artifacts and the list goes on. Terri had 3 Siberian husky wolf dogs (Professor, Polar Bear and Possum) that she cherished. She was considered a puzzle freak, she had hundreds of puzzles that she had put together in no time flat. Her passion was organic gardening, she spent many long hours working in her garden. Terri also loved attending the farmer's market in the summertime on a weekly basis whether it was buying organic fruits, veggies, and plants, or helping out at one of her friends' booths. She was just so crazy about the outdoors. She enjoyed taking her son hunting and getting up in the early a.m. to take him fishing. She also enjoyed just walking around in the woods with her girlfriend Tabby and her dog Possum. Terri was the kind of person who took in the young teenagers who had no homes to go to. Terri is survived by her daughters Laura and Elisha; sons, Steven and Willy; her best friend/partner Bill, and many extended family members. Terri will always be remembered as a very strong-willed, Stubborn (with a capital S), determined, independent, beautiful woman who fought to the end. As per her last wishes, part of her will be spread over The White Horse Monument in South Dakota. A memorial service was held Saturday, September 15, 2012, at the Memory Gardens Chapel. She will be dearly missed but not ever forgotten. We All love you Terri.

Terri Lynn Brown passed away Saturday, August 25, 2012, at 12:43 am at OHSU in Portland, Ore., after fighting a serious illness for five years. Terri was born in Pasadena, Calif., November 14, 1960, to Eugene Brown and Betty Bell. As a young... View Obituary & Service Information

The family of Terri Lynn Brown created this Life Tributes page to make it easy to share your memories.

Send flowers to the Brown family.