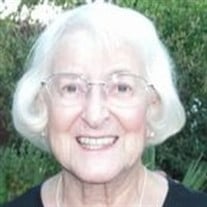 With close friends by her side, Ruth Elizabeth (Bennett) Root of Jacksonville, Oregon passed away at her home on Sunday, December 20, 2009. Interment will be at the Eagle Point National Cemetery at 9 am on Friday, January 8 followed by a Celebration of Life Service at 11 am at the Memory Gardens Chapel, 1395 Arnold Lane, Medford. Ruth, who was born on April 12, 1921 in Westfield, Illinois, was the youngest of Ivan and Myrtle Bennett's 5 children. She lived her entire young life in the same house on the 640-acre Spellbring Farm, where her father raised corn. She graduated from Englewood Hospital School of Nursing in Chicago in 1942, the same year she married Bob Root. He was a B-17 flight instructor in the U.S. Army and served in the Pacific Theater during WWII as a B-29 combat pilot and as one of the famed pilots who ferried supplies over the Himalayan "hump" between China and India. She worked in hospitals as the operating room supervisor in Chicago, Inglewood and Costa Mesa, CA, Minneapolis, and Atlanta. Upon Ruth's retirement in 1991, they moved to Jacksonville and began in Ruth's words, "a whole new life." Within months of their arrival they were actively involved in the Jacksonville Boosters Club and the Jacksonville Garden Club, and tirelessly volunteered their creative energy to enhance the place Ruth said, "the Lord brought us to." April 19, 2008 was proclaimed "Bob and Ruth Root Day" by James Lewis, Mayor of Jacksonville, and they were given the Key to the City Award. They were recognized with numerous local, state and national awards for their work with the National Garden Clubs (NGC). Ruth was the quintessential mentor. She eagerly shared her knowledge and skills in operating room techniques; project management; gardening; floral design and judging; baking, canning and quilting; and was delighted when others caught her vision for excellence, innovation, and progress. Jeanne Stafford, NGC Emeritus-Master Judge, made the following observations, "Ruth was blessed with the gift of giving and what she gave was herself. She was a happy woman dedicated to doing her very best. As a NGC Accredited Flower Show Judge she judged with knowledge and integrity. Her floral designs were memorable and technically excellent. Ruth and her husband who she called 'My Bob' were a loving and supportive team and their work smiled on each other." Bob and Ruth had no children, but they maintained strong ties with her sibling's children. They acted as counselors and confidantes to them in their formative years. Ruth spoke frequently with pride about their considerable accomplishments. When the Roots celebrated their 50th wedding anniversary in 1992, 44 members of the extended Bennett family along with 23 of their closest friends gathered in Estes Park, Colorado. Ruth knew that her work on earth was complete when her beloved companion passed away less than 4 months earlier, on September 5, 2009. Among Ruth's siblings, Huber Bennett, Marie Thornton, Doris Graham and Mae Mehling, only Doris who lives in Walnut Creek, CA survives. Ruth is also survived by her nephews and a nieceRichard Bennett, David Bennett, and Rose Anne Bennett Bradley; Edward Thornton; Ronald, Robert, and C.J. Mehling; Gregg Graham, and Bob's nephews and niecesKenneth Root; Corrie Grummon; Greg, Richard, Robert, and Ruth Shade; their spouses as well as numerous grandnephews and grandnieces. She was a member of the First Church of the Nazarene in Medford. Her family, friends, professional colleagues and community have been blessed by Ruth's life and her special touch enriched each one. Memorial contributions may be sent to the Jacksonville Garden Club, P.O. Box 1575, Jacksonville, OR 97530; Jacksonville Boosters Foundation, P.O. Box 1061, Jacksonville, OR 97530 and Jacksonville Woodlands Association, P.O. Box 1210; Jacksonville, OR 97530. Memory Gardens Memorial Park & Mortuary are in care of arrangements. www.memorygardensmortuary.com

With close friends by her side, Ruth Elizabeth (Bennett) Root of Jacksonville, Oregon passed away at her home on Sunday, December 20, 2009. Interment will be at the Eagle Point National Cemetery at 9 am on Friday, January 8 followed by a Celebration... View Obituary & Service Information

The family of Ruth Elizabeth Root created this Life Tributes page to make it easy to share your memories.

With close friends by her side, Ruth Elizabeth (Bennett) Root...

Send flowers to the Root family.