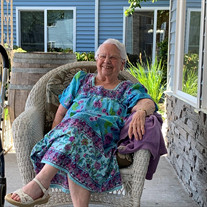 Rose Marie Dent was born July 30, 1929 in Portland, OR. to parents George F. and Leo Mae(MacDougall) Dent where she lived her first 17 years. She had five older brothers, one younger and one older sister all precededing her death. She graduated from Collins View Elementary School in 1943 and Clinton Kelly High School of Commerce(now Cleveland High) in Portland, OR. in 1947. She worked as a secretary after high school until moving to Colorado to care for her sister. In March 1948 she married Jack White in Fowler, CO and they immediately moved to Hugoton, KS where they lived until 1950. They then relocated to southern CA. and Rose again worked as a secretary. They were members of the Westminster Baptist Church. In March 1960 they adopted their first son Jeffrey Lynn White, in February 1961 son number two Michael Dean White was adopted and in March 1964, John Scott White, son number three was adopted. Jack was transferred to Beaverton, OR. in 1966 and the family bought a home in Hillsboro, OR. where all three boys attended school. In 1979, Jack, Rose and John Scott moved to Crescent City, CA. where Jack served as a Forecast Analyst for the telephone company. Rose did not work outside the home but was involved in the Women's Missionary Union, taught Sunday school and played the piano at church services. When Jack retired, they bought a travel trailer and did volunteer mission work after moving to Grants Pass., OR in 1982. Jack was diagnosed with cancer and passed in 1985. Rose remained in Grants Pass and was active in Lincoln Road Baptist Church and Rogue River Baptist Church. She served as Siskiyou Baptist Association WMU Director and Baptist Women Director Northwest Baptist convention. She met Gordon Robinson(Director of Missions for Siskiyou Baptist Association during this time and they fell in love and married on Jan. 2, 1990. Gordon preceded her in 2010. He had adopted two children; Stephanie and John. After Gordon's passing Rose moved to Fountain Plaza Retirement Community in 2011. She was involved in their Sunday Vesper services playing piano when needed and securing presenters for the services. Rose enjoyed many other activities in the community. She spent two terms as Secretary of the Fountain Plaza Residents Council and was the current Council President. Rose has 11 grandchildren and 5 great grandchildren. She was a member of Lozier Lane Baptist Church. After selling her car she began attending The First Church of the Nazarene(now New Life Nazarene Church) as often as possible. Funeral services are scheduled for 11:00AM Tuesday, Aug. 24, 2021 at the Lozier Lane Baptist Church, 794 Lozier Lane, Medford, OR 97501. She will be laid to rest beside Jack in Eagle Point National Veterans Cemetery, Eagle Point, OR. following the church service. In lieu of flowers contributions are suggested to the Lozier Lane Baptist Church.

Rose Marie Dent was born July 30, 1929 in Portland, OR. to parents George F. and Leo Mae(MacDougall) Dent where she lived her first 17 years. She had five older brothers, one younger and one older sister all precededing her death. She graduated... View Obituary & Service Information

The family of Rose Marie Robinson created this Life Tributes page to make it easy to share your memories.

Send flowers to the Robinson family.