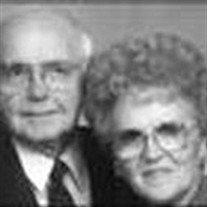 Rolen William Rosecrans of Gold Hill, Oregon passed from this life Thursday, May 12, 2011, at his home. Rolen was born February 24, 1927, in Gold Hill, Oregon, the last child of Benjamin Franklin Rosecrans and Gertrude Evelyn Flippin. Rolen's early years were spent on his family's five generation farm on Galls Creek, where he helped his mother struggle through the great depression. He attended Gold Hill High School, where he met the love of his life, Edro June Davis. Edro and Rolen were married July 13, 1945, when he was home on leave from World War II. Rolen was the last of his siblings to pass away. He was preceded in death by his wife, Edro; and by an infant child, Coni Renee Rosecrans. Edro and Rolen were the parents of seven beloved children, Ronda June Lowder (Jesse Lowder) of Gold Hill, Oregon, Coni Renee Rosecrans (deceased), Rebecca Ann Schofield (Anthony Schofield) of American Fork, Utah, Tambra Kay Wells of Gold Hill, Oregon, Ray Rolen Rosecrans of Pleasant Grove, Utah, Rodney William Rosecrans (Marcya Daniels), of Corvallis, Oregon, and Kim Susannah Matheson (Mark Matheson) of Alpine, Utah. They were grateful for their 26 treasured grandchildren and 44 great-grandchildren. He also had countless wonderful friends that blessed his life. Like so many in his generation, Rolen left high school to enlist in the United States Navy to serve in World War II. His ship was anchored in the harbor in Guam, preparing for the invasion of Japan, when the war ended. After the war, Rolen returned home to his sweetheart and to the family farm. After obtaining a certificate in electronics from Oregon State University, Rolen spent 30 years working for Pacific Northwest Bell Telephone and working the farm, raising cows, pigs, chickens and alfalfa. The greatest joys of his life were found in spending time with his large, wonderful family and in serving in the Church of Jesus Christ of Latter-day Saints, where he served as Bishop and Stake Patriarch. Funeral services were held Saturday, May 21, 2011, at 1:00 p.m., at the Central Point LDS Church, 2305 Taylor Road, Central Point, OR 97502. Family and friends may call at the chapel between 12:00 noon and 12:30 p.m., before the funeral. Interment will be at Rock Point Cemetery, Gold Hill, Oregon.

The family of Rolen William Rosecrans created this Life Tributes page to make it easy to share your memories.

Rolen William Rosecrans of Gold Hill, Oregon passed from this...

Send flowers to the Rosecrans family.