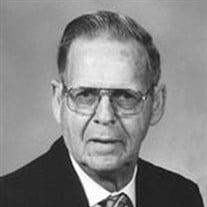 Robert Charles Sanderson, Sr., 88, left this earth for his heavenly home on Saturday, March 14, 2009. He passed away at home, with his family at his side. Robert was born May 30, 1920 in Beagle, Oregon, the fifth child of Charles Camp Sanderson and Agnes May Ashworth Sanderson. On October 4, 1944, in Medford, Oregon, he married Nellie May Bunce, who survives. They made their home at Trail, Oregon and raised their four children there. Robert grew up on a ranch in Beagle and attended Antioch School. He was employed most of his working years by Steve Wilson, starting out hauling livestock for Steve from the Rogue Valley to the San Francisco Bay Area in the 1940s. Later he worked for Steve in the truck shop at Trail, Oregon, and then in White City when Wilson built a new shop and service station there. He retired in 1974 after being diagnosed with Multiple Sclerosis. He was active in church work and was a lay minister at the Brownsboro and Table Rock churches. He served on the school board of the Eagle Point School District for several terms. He spent his spare time reading his Bible, playing cribbage, and spending time with his family. In addition to his wife, Robert is survived by his younger brother, Ernest Ray Sanderson of Coos Bay, Oregon; his three daughters Judith Ann Baalman and husband Nicholas A. Baalman, Sr. [Tony] (Talent), Karen Marie Howard (Eugene), Joyce Eileen Neil and husband Terry (Sunriver), and a son, Robert Charles Sanderson, Jr., and wife Debbie (Phoenix); grandchildren Jolinda Lee Baker, J. Richard Baalman, Nicholas A. Baalman, Jr., Ryan Charles Hayes, Kristi LaNae Neil, Samantha Renee VanWyk, Staci Rae Plummer, Russell Edwin Howard, Sonja Lenae Cummings and Cassie Mae Gybels, step-grandchildren Kristina Lee Lorenzen and Ch Lynn Skofield; 16 great-grandchildren, and a number of nieces and nephews. In addition to his parents, he was preceded in death by his sister Thelma Agnes Beers, brothers Milton Ashworth Sanderson, Lawrence Bridane Sanderson, and Richard Lloyd Sanderson, his great-grandparents Mathias Welch and Mary Nossaman Welch of Central Point, Oregon, and his grandparents Robert Ashworth and Caroline Welch Ashworth and Charles Sumner Sanderson and Anna Mielke Sanderson, also of Central Point. A celebration of Robert's life will be held at 2 p.m. on Saturday, March 21, 2009, at First Baptist Church, 649 Crater Lake Avenue, Medford, Oregon. Pastor Emeritus Garland Shinn of Ashland Bible Church will officiate. In lieu of flowers, contributions may be made to Providence Hospice, 2033 Commerce Drive, Medford, OR 97504 or First Baptist Church of Medford, 649 Crater Lake Avenue, Medford, Oregon.

Robert Charles Sanderson, Sr., 88, left this earth for his heavenly home on Saturday, March 14, 2009. He passed away at home, with his family at his side. Robert was born May 30, 1920 in Beagle, Oregon, the fifth child of Charles Camp Sanderson... View Obituary & Service Information

The family of Robert Charles Sanderson created this Life Tributes page to make it easy to share your memories.

Robert Charles Sanderson, Sr., 88, left this earth for his heavenly...

Send flowers to the Sanderson family.