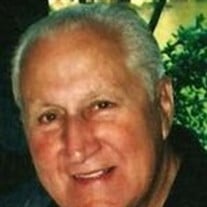 Robert "Bob" Leslie Carpenter passed away at his home March 16, 2009, surrounded by his loving family. He was 87. Bob was born July 21, 1921 in Port Angeles, WA to parents Claude Cyrus Carpenter and Elsie May Albright. His parents worked in logging camps in British Columbia, where Bob spent much of his youth. In his early adulthood, he moved to Loma Linda, CA and attended Pacific Union College, graduating in 1940. He then moved back to Port Angeles, WA. It was there that he met and married Helen Irene Brown, who precedes him in death. In 1942, Bob enlisted into the Navy where he served with the Navy "Seabees" stationed in the Aleucian Islands and Hawaii. After his discharge from the Navy, Bob worked with the plywood industry for years; beginning with Peninsula Plywood in Port Angeles, WA. and later moving to Crescent City, CA. to work for Northern California Plywood in 1954. Bob moved to Medford, Oregon in 1960. It was here that he worked as a salesman and serviceman for Reichhold Chemicals for 25 years until his retirement. In 1983, through mutual friends, he met and later married Frances Sue Carpenter, who survives. After retirement, Bob enjoyed woodworking, crafting, camping, RV'ing and taking trips with his family. He was actively involved in both the Elks and Moose Lodges. Bob was a people person, always kind and was liked by everyone. He had a great enthusiasm for life and an unwavering sense of humor. He will be greatly missed. He is preceded in death by his first wife of 41 years Helen Irene Brown, his brother George Carpenter and step-brother, Ed Reetz. He is survived by his wife of 25 years Sue Carpenter, Medford, his two daughters Leslie (Verne) Long, Medford and Susan (Bob) Yanish, Chehalis, WA. his step-daughter Sue (Jack) Kneedler, White City, step-son Brad Wood, WA. Grandchildren Jeff Yanish, Lisa Rupert, Ruben Wood, Joe Wood, Gabriel Wood, Sarah Johnson, Brendan Prendergast, Stephanie Kneedler, Haley Kneedler and Corey Kneedler, as well as 6 great-grandchildren. A Celebration of Life will be held at Memory Gardens, 1395 Arnold Ln. Medford, OR 97501 on Saturday, April 18, 2009 at 2:00pm. A reception will follow. In lieu of flowers, donations may be made to the Lions Blind Center or Rogue Valley Hospice.

Robert "Bob" Leslie Carpenter passed away at his home March 16, 2009, surrounded by his loving family. He was 87. Bob was born July 21, 1921 in Port Angeles, WA to parents Claude Cyrus Carpenter and Elsie May Albright. His parents worked in... View Obituary & Service Information

The family of Robert L. Carpenter created this Life Tributes page to make it easy to share your memories.

Robert &quot;Bob&quot; Leslie Carpenter passed away at his home March 16,...

Send flowers to the Carpenter family.