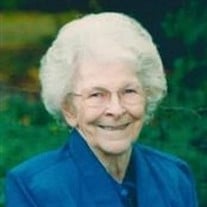 Pearl Helen Downing, 90, of Lake Stevens, Washington, died on Saturday, February 5, 2011 in Marysville, Washington. She was a resident of Lake Stevens for 10 years. Previously, she resided in Medford, Oregon for 27 years. She was born September 1, 1920 in Chehalis, Washington, the daughter of George and Emmy Hanks and lived in Ryderwood, Washington. She married Ermel Downing in Ryderwood on February 13, 1943 and together they had five children, 4 daughters and 1 son. Ermel and Pearl were married for 53 years until Ermel's death. She was a member of the Church of God of Prophecy for over 50 years and for 18 years she led a group which baked donuts to fund the church payment in Hoopa, California. She enjoyed playing the piano for church services and had a passion for traveling to Hawaii. Pearl is survived by 4 daughters and 1 son, Twila Eastburn of Klamath Falls, Oregon, Sandra Taylor of Lake Stevens, Washington, Pamela (Frank) McCrary of Omaha, Nebraska, Nancy (Tony) Cieri of Medford, Oregon and Larry (Penny) Downing of Goldendale, Washington; a sister, Lorraine Olsen of Bentonville, Arkansas, 15 grandchildren, 15 great-grandchildren and 1 great-great-grandchild. She is preceded in death by her husband, Ermel Downing, a brother, Herbert Hanks and a grandchild, Bryan Kellison. Pearl's funeral service will be conducted at 3:00 p.m. Saturday, February 12th at the Church of God of Prophecy, 23rd & Maple, Everett, Washington with a reception to follow at the same location. She will be laid to rest with her husband at Memory-Gardens Memorial Park, 1395 Arnold Lane, Medford, Oregon. Visitation will be held from 2:00 - 7:00 p.m., Friday at the Solie Funeral Home, 3301 Colby Avenue, Everett, Washington. Charitable contributions may be sent to Church of God of Prophecy, 4732 136th Place NE, Marysville, Washington 97281 in care of Delores Huff.

Pearl Helen Downing, 90, of Lake Stevens, Washington, died on Saturday, February 5, 2011 in Marysville, Washington. She was a resident of Lake Stevens for 10 years. Previously, she resided in Medford, Oregon for 27 years. She was born September... View Obituary & Service Information

The family of Pearl Helen Downing created this Life Tributes page to make it easy to share your memories.

Send flowers to the Downing family.