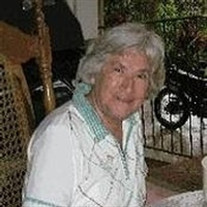 Nelly Waugh, 83, of Talent, Oregon has left this earth to be with the Lord on Thursday February 24, 2011 at her home in Talent, Oregon. Nelly Waugh was born September 19, 1927 in Granada, Nicaragua, the daughter of Luis and Elsa Rocha. Nelly lost both of her parents by the time she turned 12. She then helped to raise her two younger brothers, Luis and Leonardo. At the age of 19 Nelly left Nicaragua and moved to San Francisco, California to attend beauty school. She later changed her schooling and earned a certificate in accounting. She knew no English when she first arrived in the US, but she was fantastic at sewing. This skill enabled her to work at Lilly Anne's factory making expensive women's clothing while attending school. Nelly married William (Bill) Charles Waugh on May 28, 1955 in San Francisco. Bill was transferred to the Rogue Valley with his job so they moved to Ashland in 1975. In 1984 Bill and Nelly started the Talent Insurance Agency in Talent. Shortly after Bill's death, the agency was sold. In 2004 Nelly purchased a coffee farm in her home country of Nicaragua to stay warm during the cold Oregon winters. In 2008, she helped to create NicaNelly, a Nicaraguan import store located downtown Talent, which is named for her. Nelly loved the Lord, sewing and crocheting, exercising with her ladies groups and above all, she loved her grandchildren the most. She volunteered throughout the Rogue Valley and touched the hearts and lives of many people. She will be deeply missed. Nelly was preceded in death by her husband Bill Waugh and two brothers, Luis Rocha of Daly City, CA and Leonardo Rocha of Niquinohomo, Nicaragua. Nelly is survived by her sister Carmen Bihler of Talent, OR, her son, Philip Waugh of Medford, OR, daughter, Jennifer Hanson of Ashland, OR, 6 grandchildren, in addition to so many cousins, nieces and nephews in Nicaragua and the United States that it is too many to list here. Contributions may be made in the memory of Nelly Waugh to Phoenix Chapel, PO Box 426, Phoenix, Oregon, 97535

Nelly Waugh, 83, of Talent, Oregon has left this earth to be with the Lord on Thursday February 24, 2011 at her home in Talent, Oregon. Nelly Waugh was born September 19, 1927 in Granada, Nicaragua, the daughter of Luis and Elsa Rocha. Nelly... View Obituary & Service Information

The family of Nelly Maria Waugh created this Life Tributes page to make it easy to share your memories.

Send flowers to the Waugh family.