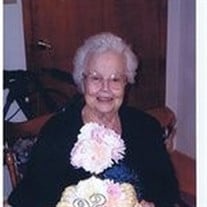 Nellie R. Jackson, 94, of Medford, Ore., passed away Sunday, April 11, 2010. She was born November 4, 1915, in Marfa, Texas, to George and Lillie Russell. She was the youngest of 4 children: Elizabeth, Coley, and Ed, all of whom preceded her in death. Nellie traveled with her father, a draftsman and US Forest Service Ranger, during her early teenage years as he did his Forest Service training shows throughout New Mexico. She did trick-shooting demonstrations with him and helped him document the forest for environmental concerns in the 1920's. Nellie married William "Bill" Jackson on December 24, 1933, in Las Cruces, New Mexico. They were married for 62 years, and had 3 children: Barbara Layton, Eagle Point, Ore. (deceased), John Jackson, Sr., Medford, Ore., (deceased) and Sid Jackson, Osprey, FL. She and Bill were hairstylists and barbers in Texas before she studied applied arts for one year at Texas Technological University. The Jacksons moved to the Rogue Valley in 1947 and built their home in Eagle Point. She designed their own home and then spent 56 years in the Rogue Valley as a draftswoman and designer of architecture before retiring in 2003 at the age of 88. Nellie was mainly self-taught in both painting and design. She drew plans for hundreds of custom new, solar heated and Victorian styled homes, churches and temples, as well as commercial buildings, and worked closely with building contractors all over Oregon and other states. For a time, she would design buildings and her husband Bill would help build them. She was a life-long member of the Southern Oregon Society of Artists, was vice-president of the Society, and was selected year after year as "Artist of the Year" in many local galleries. She was active in the Soroptimist Festival of Arts, the American Cancer Society, the Eagle Point Historical Society, the District 9 Senior Citizens Club, the Antelope Women's Dining Club and the Order of the Eastern Star. Her passion was for watercolors and oils of natural subjects including the Coast, lighthouses, African wildlife and culture, and animals of all sorts. Her other hobbies included traveling with her husband, fishing, gardening and being with family. Throughout her life, Nellie was the family caregiver: first taking care of her invalid mother at her home in Eagle Point for many years; and then taking care of her husband, Bill, until his death in 1995; and then being caregiver to her daughter, Barbara, until her death in 2000. The last year of Nellie's life was spent being taken care of at Andrea's Adult Foster Care home in Medford. Survivors include her son Sid (Teresa) Jackson; daughter-in-law, Mary Ellen Jackson, of Medford, Ore.; son-in-law Joseph Layton, Eagle Point, Ore.; grandson, Sid Layton, of Central Point, Ore.; granddaughter, Lori (Bob) Striplin, of Medford, Ore.; grandson, John (Serena) Jackson, Jr.; of Medford, Ore.; granddaughter, Staci Johnson, of Osprey, Fla.; granddaughter, Julie (Justin) Skelton, of Medford, Ore.; and four great-grandchildren, Abigail, Amelia and Austin Skelton and Will Jackson. Nellie was a loving mother, grandmother, great-gramma, aunt and friend, and she will be greatly missed. Funeral services will be at 2:00 p.m. Thursday, April 22, 2010, at Memory Gardens Chapel, 1395 Arnold Lane, Medford. Interment will be in Butte Falls Cemetery. Memorial contributions may be made to the American Cancer Society or the Southern Oregon Society of Artists.

Nellie R. Jackson, 94, of Medford, Ore., passed away Sunday, April 11, 2010. She was born November 4, 1915, in Marfa, Texas, to George and Lillie Russell. She was the youngest of 4 children: Elizabeth, Coley, and Ed, all of whom preceded her... View Obituary & Service Information

The family of Nellie Reeve Jackson created this Life Tributes page to make it easy to share your memories.

Send flowers to the Jackson family.