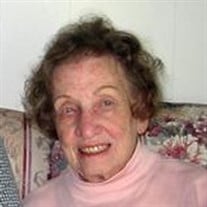 A memorial service for Muriel N. "May" Gathright, age 87, of Wimer, Oregon will be held at 10:00AM Saturday May 19, 2012 at the Memory Gardens Mortuary Chapel, 1395 Arnold Lane, Medford, OR 97501 with a reception to follow. Muriel Gathright was born Muriel Neva Bailey on November 7th, 1924 in Lewiston Idaho to Frank & Lydia Bailey, the youngest of their five children. They moved to Saint Helena, CA. and eventually settled in Inglewood, CA. where she grew up and graduated from Hollywood High School. She met her first husband Frank May while working for The Garrett Corporation in L.A. and they were married March 1st, 1947 and had three daughters. They then moved to The San Fernando Valley where she became a leader in the Bluebirds, Camp Fire Girls and Girl Scouts. She was an active church member and joined the Eastern Stars in 1960 receiving her 50 year membership pin two years ago. They moved to Granada Hills, CA. around 1965 where she went to work for Pinecrest Schools as a pre-school teacher until Frank's retirement, they then moved to Medford, Oregon in 1973. They continued going to Eastern Stars meetings and enjoyed boating, fishing and camping with The Good Sam's Club. After Frank passed away in 1989 she lived on her own for 15 years still attending Eastern Star Meetings. On May 9th, 2004 she remarried Lloyd A. Gathright, a long time friend of both hers and Frank's and moved to Wimer where she resided until her death. The two of them had many adventures together going on a boat cruise to Alaska and a riverboat on the Mississippi River. They enjoyed camping and also attended Eastern Stars together. She was a member of Aderal Chapter # 3 of Jacksonville, Mazama Chapter # 185 Medford and Rogue River Daylight Chapter # 186. She is survived by her husband Lloyd Gathright, Daughters; Luree Heese & husband Knud of Bay Point, CA., Candy Steele & husband Marvin of Libby, MT. and Frankie Redding & husband Glen of Coos Bay, OR. She has 5 Granddaughters, 2 Great Granddaughters, and 5 Great Grandsons. She will also be missed by an extended loving family of nephews, good friends and helpful neighbors. Our special thanks to Maureen Cobb who has Maureen's Adult Foster Care for her loving care of Muriel in her last days. Arrangements are under the direction of Memory Gardens Mortuary.

A memorial service for Muriel N. "May" Gathright, age 87, of Wimer, Oregon will be held at 10:00AM Saturday May 19, 2012 at the Memory Gardens Mortuary Chapel, 1395 Arnold Lane, Medford, OR 97501 with a reception to follow. Muriel Gathright... View Obituary & Service Information

The family of Muriel Neva Gathright created this Life Tributes page to make it easy to share your memories.

Send flowers to the Gathright family.