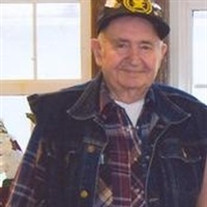 Morton E. Price Sr., age 81, of White City, Oregon passed Monday, Sept. 3, 2012 at his home. He was born April 12 ,1931 in Kuna, Idaho to Peter Irving and Beulah Belle(Wiman) Price. In 1949 he married Connie Lucille Shaul who survives. They celebrated a fabulous 62 years, 11 months and 3 days of marriage. Morton and Connie came to the Rogue Valley in 1952. He was a well known and respected carpenter in the area having worked most recently for W.L. Moore. In later years he enjoyed cutting, selling and delivering firewood with his son. Hobbies include hunting, fishing, gardening and reloading ammunition. Survivors include his wife Connie, four children; son Monty Price of Trail, OR, three daughters; Judy Widman of Shady Cove, OR., Connie Robbins of White City, OR., and Lorrie Prince of Prospect, OR., two sisters; Beulah Cousins of Redmond, WA., and Kate Burch of CA., 14 grandchildren and 23 great grandchildren. He was preceded by his parents and son Morton E. Price Jr. Funeral services will be held at 4:00PM Thursday, Sept. 6, 2012 at the Memory Gardens Chapel, 1395 Arnold Lane, Medford, OR. Morton will be laid to rest beside his son in Memory Gardens Memorial Park. www.memorygardensmortuary.com

The family of Morton E. Price created this Life Tributes page to make it easy to share your memories.

Send flowers to the Price family.