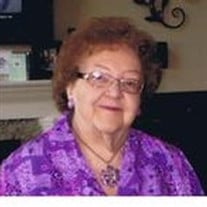 Mildred A. Bartley, age 87, passed away at her home Tuesday, September 26, 2012, surrounded by her children and grandchildren. She was preceded in death by her husband Paul C. Bartley (1924-1988) and her daughter, Melinda Barney (1954-2010). "Millie, as she was known, was born in Cleveland, Ohio, the third child of Czechoslovakian immigrants. After graduating high school, she attended St. Anne's all-girl academy, where she studied nursing. She eventually switched careers and became a professional seamstress, showing great skill in making men's suits and women's wedding gowns. She was a member of Catholic Daughters of the Americas and St. Anne's Altar Society of Sacred Heart Parish. Her proudest achievement, however, was being a wife, homemaker, and mother of eight children. She is survived by seven of her eight children, Sharon Brzowski (David), Paul Bartley Jr. (Nanci), Marie Reynolds (Bruce), Colleen McKenna (Edward), Eric Bartley (Kerry), Donna Vuittonet (Rudy), and Denise Bartley; 23 grandchildren' and 24 great-grandchildren. Arrangements have been made through Memory Gardens Mortuary, Medford, Oregon and a memorial Mass was held in her name Saturday, September 29, 2012 at Sacred Heart Catholic Church, Medford, Ore. A Rosary is scheduled just prior to the Mass.

The family of Mildred Ann Bartley created this Life Tributes page to make it easy to share your memories.

Send flowers to the Bartley family.