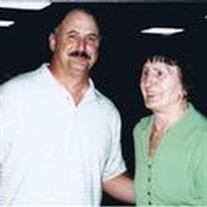 Mary Rose Lallo, 89, of Talent, Ore., passed away at Rogue Valley Memorial Hospital on Saturday April 2, 2011. In the presence of family she went to be at home with our Lord. Mary was born on August 4, 1921. She was the first daughter born to Mary Grace & John Sanzo in Cleveland, Ohio. She married our father, Anthony Nicholas Lallo, July 5, 1941. Mary and Anthony moved to Van Nuys, Calif., with their young family in 1957. Mary relocated to Talent, Ore., with her husband in 1975 to join her youngest son, Ron Lallo, already living in the Rogue Valley during the early 1970's. Mary loved her children and was the most generous person we have ever known. She gave everything of herself to her children right to the very end. All of us feel such a grievous loss with her passing. Our Mother was the best mother any of us could have ever hoped for and as her children we would not change anything about our life growing up. Our mother was truly one of a kind whom we so dearly love and will miss. Her love overflowed to each of us with abundance. Many a Sunday was filled with joyous laughter over a pot of her famous sauce and a nice custard pie. She made all of us a family. Mary's mother, father, sister and her husband, Anthony Nicholas Lallo, preceded her in death, her husband being laid to rest on November 24, 1977. Mary's oldest daughter, Toni, also preceded her in death last year on August 10, 2010. Mary is survived by her sons, Tom (Vicki), Mike (Barbara), Anthony (Mamie) and Ron (Jacqi) Lallo; as well as her daughters, Darlene (Bob) Hardin, Mary (Bill) Cossairt, Angela (Michael) Manring and Francine Davis. Mary has nine grandchildren, 21 great-grandchildren and two great-great-grandchildren. Arrangements entrusted to Memory Gardens, 1395 Arnold Lane, Medford OR. 97501. Call 541-773-7338. A memorial service will be held Saturday, April 9, 2011. at 10:00 a.m.

Mary Rose Lallo, 89, of Talent, Ore., passed away at Rogue Valley Memorial Hospital on Saturday April 2, 2011. In the presence of family she went to be at home with our Lord. Mary was born on August 4, 1921. She was the first daughter born... View Obituary & Service Information

The family of Mary Rose Lallo created this Life Tributes page to make it easy to share your memories.

Send flowers to the Lallo family.