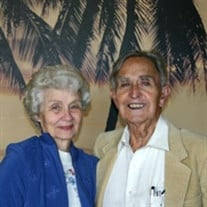 Martin Burke, 85, of Medford, Ore., died Tuesday, Feb. 2, 2010, at Farmington Square. A memorial service will be held Sat., Feb. 13, 2010, at Memory Gardens, 1395 Arnold Lane, Medford, Ore., at 10:00 a.m. Martin was born on Sept. 25, 1924, in Post Falls, Idaho, to Bill and Mary Burke, who later homesteaded in Trail, Ore. He graduated from Eagle Point High School. In WWII, he served in the Seabees 13th Naval Construction Battalion on Tinian, Guam, Okinawa, Iwo Jima and Hawaii from 1943 to 1945. In 1946, in Reno, Nev., he married Leona M. Dixon, who died in March 1984. He married Lola C. White, in Jacksonville, Ore. in 1985. Martin was a contractor and carpenter until his retirement in 1988, after which, he restored the Waverly Cottage, in Medford. He was a Cubmaster, an active member of Eastwood Baptist Church, as well as an avid member of Contemporary Autos of Southern Oregon. He restored five cars using his wood-working skills, including a Packard "Woody" and a 1931 Chevy Touring Car. Martin and his wife, Leona, were active in the Arthur Murray Dance Studio for a number of years. In addition to his wife, Lola, Martin is survived by two sons, Dennis (Gail) Burke, of Eagle Point, Ore. and Daniel (Cindy) Burke, of Monroe, Wash.; two daughters, Janet Ainsworth, of Sherwood, Ore. and Gail (Steve) McNealy, of Washington State; stepsons, Douglas (Trina) White, of Roseburg, Ore., Richard (Shirley) and David, both of Medford; stepdaughters, Barbara (Gary) Cruickshank, of McMinnville, Ore. and Elizabeth (Bob) Capsey, of Medford; eight grandchildren, Sarah, Becky, Nathan, Jenny, Grace, Bonnie, Jim and Kate; and nine great-grandchildren. He was preceded in death by his daughter, Susan Eek, in 1974; and his sister, Inez Cherry. Memorial contributions may be made to Eastwood Baptist Church, Rogue Valley Medical Center, the American Cancer Society or the Alzheimer's Association.

The family of Martin Eugene Burke created this Life Tributes page to make it easy to share your memories.

Send flowers to the Burke family.