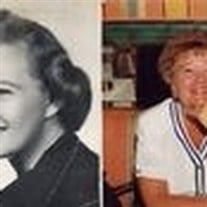 Margaret Marie Hinkle After a brief battle with cancer, Marie Hinkle passed away at her home on September 25, 2010 surrounded by her devoted husband of 55 years and her three daughters. Marie was born on a farm near Beaver City, Nebraska on January 2, 1937, to Donald and Grace Lamb. She was the oldest of four children. Marie spent her childhood in Nebraska, graduating from Holbrook High School in 1954. She attended college at McCook Junior College in McCook, Nebraska. Upon earning her teaching certificate, she taught in a one-room country schoolhouse for one year. She met her future husband while attending school in Beaver City. On August 21, 1955, she married Wilbur Allen Hinkle in Arapahoe, Nebraska. They resided for a short time in Nebraska and Kansas before moving to Medford, Oregon in 1957. While raising her three daughters, Marie worked at various seasonal jobs. She was a 4-H leader and active in the PTA at Oak Grove Elementary School. In March of 1970, she started working at the Jackson County Juvenile Detention Center as a Group Counselor. She remained there until her retirement in 2002. Because she enjoyed counseling kids in need, she continued working part-time until March 2010. Part of her job was cooking for the kids, making sure they had nutritious meals. She was most famous for her homemade cookies. The kids and staff looked forward to the day Marie baked cookies. Marie was an avid reader; she excelled at shopping and was always able to find the best bargains in town. She loved to travel and cruising to various exotic places and countries was her favorite way to see the world. She belonged to the Table Rock Fellowship, was a member of the Twirler's Square Dance Club, and the Red Hat club. Marie had many special friends and enjoyed spending time with them. She always had a smile for everyone and was a wonderful wife and mother. Marie is survived by her husband, Wilbur, daughters Kela (Rick) Perry of Central Point, OR., Mary (Dave) DelleChiaie, of Hurst, TX, and Rhonda (Curt) Badger of Medford, OR.; four grandchildren, twins Brian Perry, of Portland, OR and Lindsy (Trent) Weseman, of Parkdale, OR; Brittney Badger, of Chicago, IL, Kyle Badger of Medford, OR; and one great-grandchild Kaden Badger of Medford, OR. She is also survived by two sisters, Shirley (Louis) Haussler, of Medford, OR and Linda (John) Swartsfager, of Roseburg, OR, one sister-in-law, Carolyn Lamb of Enon, Ohio, one aunt, many nieces, nephews, cousins, and a host of friends. Preceding her in death were her parents, and her brother Frank Lamb. The family would like to thank Ashland Hospice for their amazing support and care with special, special gratitude to her nurses Brenda, Kim, Mary, and Denise; social workers Joshua and Barbara and Chaplain Fred. Memorial services will be held in her honor on Friday, October 1, 2010, at 1:00 p.m. at Table Rock Fellowship, 3610 North Pacific Hwy, Medford, OR. Pastors Michael Brown and Kimball Hodge will officiate. Following the service, a reception will be held at the Oasis. In lieu of flowers, donations may be made to the Table Rock Fellowship Youth Program. Arrangements by Memory Gardens Memorial Park, 1395 Arnold Lane, Medford, OR 97501. Expressions of caring and condolences may be sent to Memory Gardens or placed on their website at www.memorygardens.com.

Margaret Marie Hinkle After a brief battle with cancer, Marie Hinkle passed away at her home on September 25, 2010 surrounded by her devoted husband of 55 years and her three daughters. Marie was born on a farm near Beaver City, Nebraska on... View Obituary & Service Information

The family of Margaret Marie Hinkle created this Life Tributes page to make it easy to share your memories.

Margaret Marie Hinkle
After a brief battle with cancer, Marie...

Send flowers to the Hinkle family.