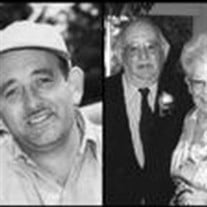 Louis "Luke" Biden Former Prospect, Ore. businessman, Louis "Luke" Biden, passed away Tuesday, September 7, 2010, at the Rogue Valley Medical Center, due to complications from a stroke. Luke was born at home in Medford, Ore., on July 9, 1913, to Maitland Biden and Hattie Salter. He moved to Prospect when he was around 12, with his mother and step-father, Frank Salter. He attended both Medford and Prospect schools. Luke married Marjorie Tucker on May 31, 1941, in Reno, Nev. Together in Prospect during the late 1940s, they started Louis Biden Logging, which included road building. Later they built and ran Mill Creek Falls Caf and Mountain Home Mobile Village and Laundromat. The logging business was sold in 1976, and Luke retired from business. Luke was a lifetime member of the Prospect Lions Club and Medford Elks Club. His interests included travel, trap shooting, fly-fishing, and duck and goose hunting. The family would like to thank the many people of Prospect who helped Luke stay in Prospect until he was 96! Special thanks go to Donna Andresen and Itol Downing, who helped with his care in the last years. Luke was preceded in death by his parents; brothers, Maitland "Manzie" and Stanford Biden; and his wife of 51 years, Marjorie. He is survived by daughter, Beth (Terry) Gardner; grandson, Jeff (Lourie) Gardner; great-grandsons, Michael and Lucas; grandson, Steve Gardner; and great-grandson, Curtis. In lieu of flowers, contributions in Luke's name can be made to the Prospect Fire and Rescue, P.O. Box 32, Prospect, OR 97536. Funeral services and celebration of Luke's life will be held on Saturday, September 11, 2010, at 1:00 p.m., at Memory Gardens Mortuary, 1395 Arnold Lane, Medford, OR 97501. Entombment will take place at Memory Gardens Mausoleum. www.memorygardensmortuary.com

The family of Louis Albert Biden created this Life Tributes page to make it easy to share your memories.

Send flowers to the Biden family.