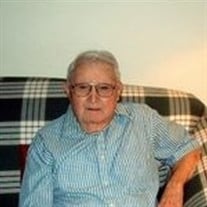 Lawrence Delvin King AKA Mickey Mouse Beloved father, grandfather, great-grandfather and uncle. Larry passed on to heaven on January 18, 2010. He was born on January 27, 1920 in Fort Bragg, CA. He graduated from Richmond High School in 1940 and joined the US Navy in 1942. On November 24, 1944 he married Alice B. Angerhofer. They were married for 60 years. Alice passed away in March of 2005. On November of 1945 their first child Carol was born. Two more daughters Sandra and Arlene followed. Larry and Alice started their life in California where all their daughters were born. They moved to South Dakota in 1954 and farmed there until 1962. They moved back to California where Larry got a job as a custodian working for the Richmond School District, until his retirement in 1979 at which time they moved to Medford to join their three daughters and families who had moved to the area. Both enjoyed helping the family with projects and spending time with their 6 grandchildren. Larry also loved trains and Mickey Mouse. He was a member of Gloria Dei Lutheran Church of Central Point for 30 years. Larry was an outgoing and friendly guy, who met many people through out the valley and cherished all the friends he made on a daily basis. He will be greatly missed. He is survived by two daughters; Sandra Gordner and husband Dan of Eagle Point, OR., and Arlene Rousan of Central Point, OR., grandchildren Joel Martin, wife Cinda and their 3 children; Nalani Terrill and daughter Jeremy Rousan and son, Jeanette Rousan, Scott Kailikea and wife Stephanie and their 2 children; Lisa Martin and nephew Ron West. He was preceded in death by his parents, wife, daughter Carol, sister Hazel and nephew David. His memorial service will be held on Saturday, January 30, 2010 at 11:00am at Gloria Dei Lutheran Church, 745 N. 10th Street in Central Point, OR. A private family inurnment ceremony will take place at Memory Gardens Memorial Park, Medford, OR. Memorial contributions can be made to Gloria Dei Lutheran Church of Central Point, OR, 97502.

Lawrence Delvin King AKA Mickey Mouse Beloved father, grandfather, great-grandfather and uncle. Larry passed on to heaven on January 18, 2010. He was born on January 27, 1920 in Fort Bragg, CA. He graduated from Richmond High School in 1940... View Obituary & Service Information

The family of Lawrence D. King created this Life Tributes page to make it easy to share your memories.

Send flowers to the King family.