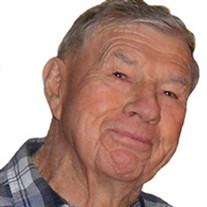 Kenneth L. Oman, 94, passed away Sunday, December 16, 2012 at Rogue Regional Medical Center in Medford, Oregon. Ken was born July 22, 1918 to John and Ida Oman in Montevideo, Minnesota, the youngest of four children. Ken was drafted in the military in WWII and served as a Tech Caporal in the Army Corps of Engineers. He spent 44 months overseas in active duty. When he came back after the war, he met his sweetheart, Hazel; they married on Valentine's Day of 1949 in St Peter's, Lutheran Church, Medford, Oregon. Ken had a very full life. In his early years, he worked in Yellowstone National Park and later on, after settling down with his wife in Medford, he worked at the JCF Bank. Ken is survived by his youngest son, Ronald; grandchildren, Shelli, Andy, Sarah, Ronnie, Joshua and Matthieu; great-grandchildren, Westin and Wyett, and numerous nieces and nephews. Visitation and viewing will take place from 3:00 to 6:00 pm on Thursday, December 20, 2012 at Memory Gardens, 1395 Arnold Ln, Medford, OR 97504. Funeral services will be held at the Chapel of Memory Gardens, on Friday, December 21, 2012 at 2:00 pm.

The family of Kenneth L Oman created this Life Tributes page to make it easy to share your memories.

Send flowers to the Oman family.