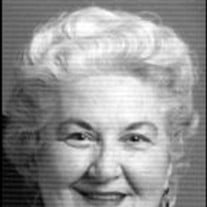 June Eleanor Beattie Titus, 20-year resident of Medford, lost her battle with cancer at her daughter's home in Seattle on Friday, November 13, nearly two years after her dear husband Earle was lost to heart failure. Born in 1921 in Youngstown, Ohio, June graduated from Eastern High School in Washington, D.C., where her father relocated, after her grade school years, for work during the Great Depression. She and Earle met and in 1940 married in D.C. and soon thereafter Earle enlisted in the Navy for the war effort, which became his lifelong career, making June a military wife. They had a son, Ronald Earle, in 1940 and a daughter, Anna Marie, in 1951. June was a beautiful, vivacious lady who loved life. Prior to her retirement years, she was actively involved in the Catholic church, teaching catechism, belonging to the Altar Society and Womens' Sodality wherever she traveled. She was an active member for more than 30 years of the Women of the Moose, a member of Beta Sigma Phi Sorority in her later years, and several other organizations over the course of her life, one being a Red Cross volunteer during the four years she spent in Japan with her husband and daughter. She was a talented fashion designer in her youth, giving up a promising career in same to be a full-time homemaker, and a wonderful seamstress. She is survived by son Ronald Titus of San Diego, daughter Anna Marie Phillips of Seattle, grandchildren Darren Titus of Portland, India Woodard of Medford, Cameron Gabriel of Ashland, and Fontaine Phillips of Bellingham, Washington, and great-grandchildren Toren and China Woodard of Medford. Services will be held at 10:00AM Saturday, Nov.21, 2009 at Memory Gardens Funeral Home, 1395 Arnold Lane, Medford, OR. 97501. Memorial gifts may be sent there and will be donated to Highline Hospice in Seattle. Interment will take place with her husband at Eagle Point National Cemetery in Eagle Point, OR.

June Eleanor Beattie Titus, 20-year resident of Medford, lost her battle with cancer at her daughter's home in Seattle on Friday, November 13, nearly two years after her dear husband Earle was lost to heart failure. Born in 1921 in Youngstown,... View Obituary & Service Information

The family of June E. Titus created this Life Tributes page to make it easy to share your memories.

Send flowers to the Titus family.