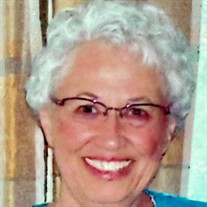 Joyce passed away peacefully at The Springs in Medford, Oregon on February 23, 2022. She was born on July 12, 1941 in her farm home near Roscoe, South Dakota. The first child born to Edna and Dan Hagele, she was preceded in death by a brother at age 4 in 1952. Joyce attended a one room country school where her mother was also her teacher. She graduated from Plainview Academy in 1959. Her early years on the farm were enjoyed by helping her parents. She would ride the “Old Greyboy” horse to get the milk cows from the pasture, gather eggs, and best of all bottle-feed the orphaned lambs. Occasionally she would help her dad in the field cut and rake alfalfa or cook his meals during the summer, while her mother attended teachers college in Aberdeen. Summertime was special with relatives and cousins visiting. Joyce knew at age 9 that she wanted to be a nurse. Keeping with that goal, she enrolled at Union College in Lincoln, NE to pursue her degree. After receiving her RN License in 1963, Joyce and her classmate Loella Johnson chose to move to California to work at Glendale Adventist Hospital. It was during the early years in Glendale that Loella invited Joyce on a month-long tour of Central America. Joyce travelled throughout the various countries and the San Blas islands off the coast of Panama. This was indeed an adventure for a farm girl! Her single years from 1963 to 1969 in Glendale were filled with work and recreation. In 1969 Joyce accepted a job at Kettering Memorial Hospital in Dayton, Ohio. She later moved back to CA in 1972 after accepting a position at Paradise Valley Hospital in San Diego. In 1973 Joyce met Merlin Heim at a potluck and they were later married on August 4, 1974 in her home town of Bowdle, South Dakota. Joyce and Merlin spent the majority of their 42 years in San Diego, California. Merlin retired from microbiology in 1998, and Joyce worked in same day surgery until retirement in 2006. They moved to Medford, OR in 2011. Merlin passed away in 2017. Joyce is survived by her three stepsons Kevin, Wesley, Eric, their spouses, and 6 grandchildren.

Joyce passed away peacefully at The Springs in Medford, Oregon on February 23, 2022. She was born on July 12, 1941 in her farm home near Roscoe, South Dakota. The first child born to Edna and Dan Hagele, she was preceded in death by a brother... View Obituary & Service Information

The family of Joyce Heim created this Life Tributes page to make it easy to share your memories.

Joyce passed away peacefully at The Springs in Medford, Oregon...

Send flowers to the Heim family.