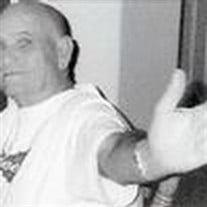 Irving Hoyle Hayward, 71, of Medford, OR. passed Saturday, July 25, 2009 at his home. He was born Nov. 5, 1937 in Chillicothe, TX. to Franklin J. & Rachel(Taylor) Hayward. On Sept. 27, 1974 in Ft. Jones, CA. he married Bonnie L. Jewell who survives. They came to Oregon from Merced, CA. in 1969. He was a union Boilermaker from 1972-1989. He enjoyed camping, fishing, hunting and billiards. His favorite past time grew to be golf at Laurel Hill. His favorite hole was the 19th! Survivors in addition to Bonnie include three children, a daughter Cheryl Maloney of White City, OR., son Andrew Hayward of Phoenix, OR., son Donald Hayward of Happy Valley, OR., 12 grandchildren and 6 great grandchildren who he loved and enjoyed being with very much, two brothers John Hayward of AL., and Donald Hayward of GA., two sisters Laddell McMullen of FL., and Mary Lee Hayward of OK. Irving was preceded by his parents, a son Jack D. Jewell, brothers Charles Hayward, Marion Hayward and sister Lorraine Clark. Graveside services will be 10:00 AM Friday, July 31, 2009 at Memory Gardens Memorial Park. A potluck reception will be held at the home of his son Andrew in Phoenix, OR. Memorial contributions are suggested to the Oregon Cancer Society. www.memorygardensmortuary.com

The family of Irving H. Hayward created this Life Tributes page to make it easy to share your memories.

Send flowers to the Hayward family.