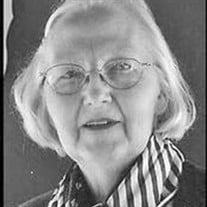 Inga Kristina Edlund Morgan, age 82, of Medford, Oregon, passed away June 1, 2012 at The Homestead Assisted Living in Rexburg, Idaho from Alzheimer's disease. Inga was born July 6, 1929 in Soderhamn, Sweden to Lars and Anna Edlund and lived most of her youth in Falun, Sweden. She had one sister, Karin, whom she loved dearly. She attended an all-girls school and then became an elementary school teacher in Borlange, Sweden. After she immigrated to the U.S., several students kept contact by letter. One student wrote her every year for 55 years until she could no longer correspond because of her illness. Inga met her sweetheart, Keith Morgan, while he was a missionary in Sweden. In October 1952, Inga left her homeland on the ship Gripsholm. Keith and Inga married October 29, 1952 in the Logan Utah Temple of The Church of Jesus Christ of Latter-day Saints. After a short time in Idaho they moved to Oregon which reminded Inga of her beloved Sweden, living in Salem, Eugene and eventually settling in Medford where they lived 50 years. Together they raised six children. Inga was a devoted wife, mother, and grandmother; and she loved her occupation as homemaker. She loved to keep flowers and beautify her surroundings. Inga was an avid genealogist tracing her family lines back many generations. She worked as a volunteer for the LDS Family History Library and found great satisfaction helping others research their family lines. Inga loved music and had a beautiful soprano voice. Whether singing Swedish folk songs to her children or performing in musical groups, many enjoyed her talent. Inga joined The Church of Jesus Christ of Latter-day Saints when nearly 21 years old and was a faithful member throughout her life. She loved the Church's Relief Society organization for women and spent many happy hours serving in the church and community. She lived by the Relief Society motto, "Charity Never Faileth." Inga and Keith served three full-time missions for the Church, two in Sweden and one in West Virginia. Inga always said that West Virginia was her "foreign-language mission" because the accent of the region was so difficult for her to understand. An important event in Inga's life was becoming a naturalized citizen of the United States May 24, 1961. Inga loved the United States and treasured her citizenship. Inga also made sure that her children knew about her homeland of Sweden, raising them with many Swedish traditions that helped them appreciate their heritage. She enjoyed participating in the local Scandia Club activities. Inga is survived by her husband, Keith; children, Anna-Kare (Fred) Edwards, of Kaysville, Utah, Ezra (Dee dee) Morgan, of Medford, Lars Morgan, of Valencia, Calif., Maria (John) Thomas, of Rexburg, Idaho, Shaun (Melissa) Morgan, of Central Point, Ore., Samuel (Encarni) Morgan, of Midvale, Utah; 23 grandchildren; and 17 great-grandchildren. She was preceded in death by her parents; stepmother, Gunvor Lejon Edlund; and her sister. Services will be held Saturday, June 9, 2012, at the LDS Medford Stake Center, 2900 Juanipero Way, Medford. Arrangements handled by Memory Gardens.

The family of Inga Kristina Edlund Morgan created this Life Tributes page to make it easy to share your memories.