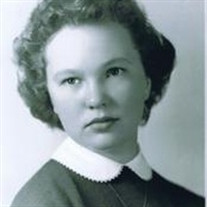 Mother, as they say, "was a force to be reckoned with," strong and courageous, just as her mother before her, Verna Hobbs Sutherlin. Mom was a combination of pioneer spirit mixed with a Scottish Cherokee Indian father, William Orval Sutherlin. She was born on December 23, 1934, in Blue Mound, Ill., Hilda Louise Sutherlin Hackworth, joined her parents; son Steven Lawrence Hackworth, sister Wanda Sutherlin Broyles, and brother William Lyle Sutherlin, in the Heavenly Realm, on February 15, 2011, at the age of 76. This side of Heaven, Mom leaves her husband of 59 extraordinary years, good times and bad, Lawrence F.Hackworth; two daughters; Cynthia (Bruce) Ash and Gwenda Tooley, grandchildren; Jeremy (Misty) Ash, Jocelyn Tooley, William (Christine) Ash and Kristin (Kevin) Clark, great-grandchildren; Cody Ash, Austin Ash, Gabrielle Clark, Ty Ash, and Rylan Ash. When Mom was eight, the family moved from Illinois to the ranch on the Applegate River in Oregon. Glorious stories of times spent with "Old Tony" the horse, summer days along the river, wearing a favorite bridesmaid dress while chasing the cows, and schoolmates from Jacksonville, Oregon, who remained lifelong friends. On February 3, 1952, Mom and Dad married, and, except for a short time in Idaho and then El Paso, Texas while Dad was in the service, Southern Oregon has been home. Along came a son, "Stevie," followed shortly by his loss at 18 months. Then "the girls" arrived, and Mom spent the next years making a home, raising children, working seasonal jobs in the local pear packing industry, even tried her hand at pruning a pear tree or two. Mom also worked in real estate sales and customer service at Harry & David, making many friends. Mom's life interests were wide and varied. She was not one to shy away from a good political debate to crocheting afghans for many family and friends. With two small children and her mother, she pulled a 32-foot trailer to El Paso, Texas, to meet Dad in a car without a reverse gear! Mom traveled to England and Scotland by herself, painted watercolor landscapes, was an avid reader, and spent many a lovely day on the golf course with her "golfing buddies." Life was always accompanied by laughter, the occasional tear and the words, "Life Goes On." We are sure family and friends in heaven have been waiting in great expectation and joy of Mom's arrival. "Did you know Hilda is coming home?" "Mom is going to be here soon." A sister, daughter, and friend, she will be met by Jesus, his arms opened wide, to welcome His child home. Well Mom, as you always said, "Life Goes On" and indeed it does for all of us. A memorial service was be held Saturday, February 26, 2011, at 1:00 p.m., at Memory Gardens Mortuary. www.memorygardensmortuary.com.

Mother, as they say, "was a force to be reckoned with," strong and courageous, just as her mother before her, Verna Hobbs Sutherlin. Mom was a combination of pioneer spirit mixed with a Scottish Cherokee Indian father, William Orval Sutherlin.... View Obituary & Service Information

The family of Hilda Louise Hackworth created this Life Tributes page to make it easy to share your memories.

Mother, as they say, &quot;was a force to be reckoned with,&quot; strong...

Send flowers to the Hackworth family.