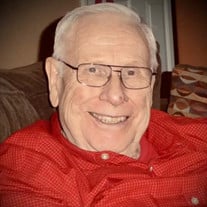 Herbert Robert (Bob) Walsh, Jr 1934-2021 Bob Walsh – beloved father, grandfather, husband, son and brother – died peacefully surrounded by family on November 5, 2021, in Medford, OR. Bob grew up in Denver, CO, attending North High School (class of ’53) and the Colorado School of Mines (Engineer of Geophysics, class of ’57). After working in Texas for a few years, Bob and Barbara (nee James), his loving wife of 53 years, moved back to Denver where Bob earned his law degree at the University of Denver (class of ’67). They lived in the Denver area for 37 years where he practiced law and they raised three children. Bob loved the outdoors and took his family on backpacking and river rafting trips and later became an avid balloonist, flying the Colorado Columbine. Bob was preceded in death by his wife, Barbara and his sister, Judy. He is survived by his children, Connie (Bob) Zillig of Grasonville, MD, Jim (Lynda Nyberg) Walsh of Arvada, CO, and Carrie (Martin) Andries of Central Point, OR, and six grandchildren, Ken and Brad Zillig, Emily and Katie Walsh, and Eleanor and Clio Andries, all of whom he was very proud. Memorial donations can be made to the Northwoods Alliance for Temporary Housing, Inc, a non-profit organization in Rhinelander, WI providing temporary housing and services to the homeless, that Bob worked with for several years. Donations can be mailed to NATH, Inc., 204 W Frederick St, Rhinelander, WI 54501.

The family of Herbert Robert "BOB" Walsh Jr created this Life Tributes page to make it easy to share your memories.

Send flowers to the Walsh family.