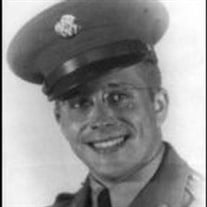 Gottfred Thorberg Nelson Gottfred Thorberg Nelson, 86, of Medford, died Monday, October 22, 2007 at Hearthstone Manor. He was born August 9, 1921, in Chicago, Ill., to Gottfred Thorberg Nelson and Augut (Sorenson) Nelson. In 1944, he married Elizabeth Walker, in Bend, Ore., who survives. Gottfred graduated in 1941 from the University of Minnesota with a degree in Engineering and Drafting. He was employed by D.M.J.M. Engineering in Los Angeles, Calif. for 30 years. Gottfred was in the community for 23 years, moving here from Anaheim, Calif. He was a member of the First Church of the Nazarene and enjoyed volunteer work as an usher. He also enjoyed the outdoors. He was a captain in the U.S. Army during WWII. Survivors, in addition to his wife, include a son, Kenneth Nelson, of Los Angeles, Calif.; a daughter, Heather Nelson, of Medford; a son, Nick Nelson, of Medford; a brother, Elmer Nelson, of Florida; and one granddaughter, Kaelyn Nelson. Please make memorial contributions to the International Fellowship of Christians and Jews. Memory Gardens Mortuary handled the arrangements. (541-773-7338). memorygardensmortuary.com

The family of Gottfred Thorberg Nelson created this Life Tributes page to make it easy to share your memories.

Send flowers to the Nelson family.