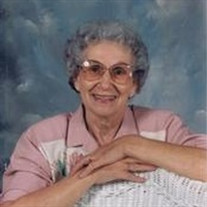 Georgia B. Ross, 89 years young, was born in Astoria, Oregon to Luke and Margaret (Aviana) Zankich. She was one of eight children, two brothers, Luke Jr and Vincent "Swede" and five sisters, Ersa, Margie, Florence, Lillian and Francis "Cookie" who have all preceded her in death except for the youngest sister, Cookie. Georgia graduated from Astoria Hight School in 1940 and went to work for a local trucking company as a secretary. She met the love of her life, Clifford Ross in Astoria while he was stationed at Fort Stevens in 1941. They were married October 17, 1943 at the Lutheran Church in Astoria and moved to Ashland after Clifford was discharged from the Army in 1945. Best Man was her brother Swede and his wife Ellen. Georgia served as Secretary at Brisco School for five years and then became a full time stay-at-home mom when daughter Peggy was born in 1949. They soon moved to their new ranch on the Old Siskiyou Highway in 1950 and built the home they lived in together until Clifford's death in 1994, after 50 happy years together. After Clifford's death she remained on the ranch for three more years, then moved to a brand new house in the Oak Valley Sr. Community in Talent, just a few doors down from sister Cookie. After 12 years in this home, she spent 1 1/2 years at Mt. View Assisted Living in Ashland and this last year at Willow House Adult Foster Care. Georgia was a avid bowler until 2006, even though she was legally blind at the time. She loved to read, do crossword puzzles, take Sr. tours to Reno and spend time with family and friends. She was a very devoted mother, grandmother and great-grandmother. She is survived by only child Peggy (Ross) Freitas, son-in-law August Freitas, only grandchild Bari Rogers, his wife Deedre and their three children Brittni, Brock and Brooke. Georgia will be missed by all who knew her. A graveside service will be held at 1:00pm, Friday, April 22, 2011 at Memory Gardens Memorial Park.

The family of Georgia Bernice Ross created this Life Tributes page to make it easy to share your memories.

Send flowers to the Ross family.