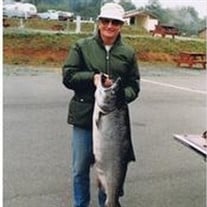 Frederick Montague Pearson, age 84, died Thursday, June 16, 2011. He was born in Jackson, Miss. on December 9, 1926 to Frederick Earl and Eunice Pearson. On April 17, 1954 in Jackson, Miss. he married Doshia Marie Rashe' who preceded him in death on December 9,2010. Fred attended Thomastown High School in Mississippi before joining the Merchant Marines where he reached the rank of Second Mate. He served two years in the US Army and during this time the family relocated to the Rogue Valley. After his honorable discharge from the Army he attended Southern Oregon College. After working for a number of years as Head Millwright for a Medford Corporation, he took an early retirement to operate a peach orchard on his acreage near Phoenix, Oregon. In 1992 he and his wife purchased a motor home and traveled extensively for the next few years. Fred was a volunteer for the Food and Friends meal site in Talent. He was an avid gardener and shared his produce with friends and neighbors. He enjoyed fishing as well as swapping hunting and fishing stories with his grandsons and friends. Fred and Marie were diehard fans of their grandsons and missed very few events throughout the years; they could always be seen in the stands cheering, whether it was at the basketball, baseball, football games, track meets, tennis or karate matches. Fred is survived by his sons; Ronald M. (Mari) Pearson and Dr. Gregory L. (Marybeth) Pearson of Medford, Ore. and daughter Lynda (Richard) Cruzen of Benicia, Calif.; seven grandsons, Fred, David and Tyler Pearson, Eric Breitenfeld, Drew, Dane and Sean Pearson; one sister, Ada Davis of Kosciusko, Miss.; as well as numerous cousins, nieces and nephews. In addition to his wife, he was also preceded in death by his parents and one sister, Joyce Langdon of Oxford, Miss. A memorial service will be held at Memory Gardens Memorial Park, 1395 Arnold Lane. Medford Ore. on Saturday, July 23, 2011 at 11:00 a.m. In lieu of flowers, donations may be made in remembrance of Fred to Food & Friends, 2860 State Street, Medford,. OR 97504. www.memorygardensmortuary.com

Frederick Montague Pearson, age 84, died Thursday, June 16, 2011. He was born in Jackson, Miss. on December 9, 1926 to Frederick Earl and Eunice Pearson. On April 17, 1954 in Jackson, Miss. he married Doshia Marie Rashe' who preceded him in... View Obituary & Service Information

The family of Frederick M. Pearson created this Life Tributes page to make it easy to share your memories.

Send flowers to the Pearson family.