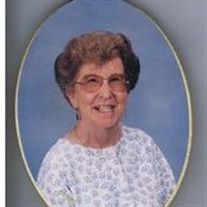 Freddie Lee Holt, 88 years of Central Point, Oregon passed away on Tuesday, June 5, 2012 due to complications resulting from a fall. During her last days, she was comforted and surrounded by family and friends. She passed while in the loving embrace of her daughter, Diane Yarrish. Freddie was born in Nutters Fort, West Virginia on October 26, 1923 to Frederick K. and Lillian Smith Forsythe. Her mother died when Freddie was only four years old. Her father remarried in 1930 to Gertrude Jeffries. Raised in Baltimore, MD during tough economic times, Freddie learned to appreciate the simple things in life, such as pride in her Irish ancestry, a devout sense of patriotism and a love of family and friends. Her early working career was spent working in record keeping. She moved to Oregon where she married Phillip Forest Holt. They had an automotive repair shop and a well drilling business in Medford. She enjoyed bowling, knitting and volunteer work at the local hospitals. She was known for never forgetting a birthday and always staying in touch with a card or letter. She made friends easily and especially bonded with her caregiver, or "baby sitter" as she called her, Marjorie Henry. She is survived by her daughter Diane (Arthur) Yarrish; her son, Scott (Cathy) Holt; grandchildren, Todd (Estelle), Justin, Travis (Jennifer) and great grandchildren, Jeremiah, Benjamin and Carl. There will be a Celebration gathering on Tuesday, June 26 at 11:00am. It will be held at Greenbriar Terrace Mobile Estates Club House, 301 Freeman Road, Central Point. After the celebration a light lunch will be served. In lieu of flowers, the family request donations be made on behalf of Freddie's Granson, Todd Loye. After a motorcycle accident May 8, Todd remains in I.C.U. at Providence Hospital in Medford. Donations may be sent to Diane Loye Yarrish, 2378 Happy Valley Drive,Medford, OR 97501.

Freddie Lee Holt, 88 years of Central Point, Oregon passed away on Tuesday, June 5, 2012 due to complications resulting from a fall. During her last days, she was comforted and surrounded by family and friends. She passed while in the loving... View Obituary & Service Information

The family of Freddie Lee Forsythe Holt created this Life Tributes page to make it easy to share your memories.