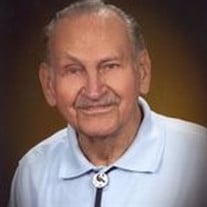 Elmer Wick, age 93, died Sunday, November 29, 2009, at local rehabilitation center. Elmer was born in Minneapolis, Minnesota, September 8, 1916, the first U.S. generation of native Norwegian parents. Graduated from North High School, Minneapolis, 1935, he then attended Dunwoody Institute where he studied accounting. Elmer married Clarice Mae Wolfgang in Minneapolis in 1943. During the war, Elmer worked at Bradley Manufacturing in Bourbonnis, Illinois. Their son, Steven Charles, was born in Kankakee, Illinois in 1945. They moved back to Minneapolis where he worked for Brown & Bigelow Manufacturing for 18 years before moving to San Francisco, where he worked for the Bank of California before retiring in 1977 as Systems Analyst and Auditor. Elmer was a violinist and once played with Eugene Ormandy and the Minnesota Philharmonic Orchestra. He volunteered with the Civilian Defense Corps after WWII, was a member of ToastMasters International (once awarded "ToastMaster of the Year"), and did extensive volunteer work in the community including design of the Blue Heron Park in Phoenix. Elmer and Clarice have resided in Bear Lake Estates, Phoenix, Oregon, and have been members of Sacred Heart Catholic Church for 23 years. He is survived by wife, Clarice Mae, son, Steven and his wife Phyllis Marie, Belton, Texas, and granddaughters Novice Marissa Suzette, Lamb of God Sisters, Owensborro, Kentucky, Erica Anne and Daniel Perez, Waxahachie, Texas, and Laura Marie Wick, Austin, Texas. Memorial Mass will be held at Sacred Heart Catholic Church, 10th and Oakdale, Medford, Oregon, on Thursday, December 3, 2009, at 11:00 AM. Memorial donations may be made to St. Vincent de Paul, Medford, Oregon or Central Texas Youth Services, 204 North East Street, Belton, Texas 76513.

The family of Elmer Wick created this Life Tributes page to make it easy to share your memories.

Send flowers to the Wick family.