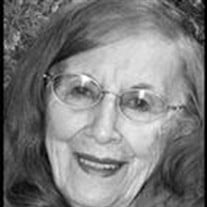 Eleanor A. Rudolph died peacefully on Wednesday, July 14, 2010, in Medford, Ore., at age 85. Eleanor was born on September 21, 1924, in St. Cloud, Minn., to Arnold Peter Kruchten and Leona M. (Neeser) Kruchten and was one of 10 children. On September 2, 1943, she married Vern H. Rudolph in Brainerd, Minn. They later settled in Caldwell, Idaho, where they raised their three children, as well as their granddaughter, Christa. For many years, Eleanor was actively involved with her husband in designing and building custom homes. In her spare time, she enjoyed making crafts, gardening, and later in life she discovered her gift for painting. Family was always important to Eleanor, so following her husband's death in 2001, she moved to the Medford area to be closer to her children and grandchildren. She is survived by daughter, Sheila Blythe; son and daughter-in-law, Robert and Sydney Rudolph; and daughter and son-in-law, Lorie and Kevin Dupee'; as well as nine grandchildren and 12 great-grandchildren. There will be a celebration of her life at 11:00 a.m. on Saturday, July 24, 2010, at her home. In lieu of flowers, donations can be made to Friends of the Animal Shelter to honor her and her love for dogs.

The family of Eleanor Rudolph created this Life Tributes page to make it easy to share your memories.

Send flowers to the Rudolph family.