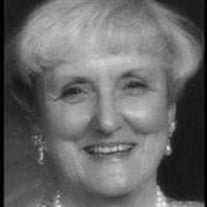 On Friday, December 3, 2010, in Redding, Calif., our family and friends tearfully but joyously released our precious wife, mom and grandma, Doris Eleanor Morris, from our worldly embraces into the eternally loving arms of her Lord and Savior, Jesus. She was 86. Doris had suffered a lengthy period of incapacitation due to a series of strokes. Doris was born May 28, 1924, in Penokee, Kans., to James and Audrey-Laverne Ebnother, the fourth of seven children. She and her family moved from Kansas to Ashland, Ore., where she graduated from Ashland High School in 1942. She married H.S. Mike Morris in 1943, and they settled in Medford, Ore. They started their family and business following the completion of Mike's service in the military during World War II. Mike was at her side as she passed away. She co-owned and operated Mike's Upholstery Shop in Medford from 1951 until 1970, before moving to Northern California in 1971. She worked as a receiving agent and personnel manager in Redding, Calif., where she had resided for the last 36 years, before retiring in 1988. Doris was a foster parent, volunteered in numerous charitable organizations, and greatly enjoyed attending the Redding First Church of the Nazarene. Doris is survived by her adoring husband of 67 years, H.S. Mike Morris, of Redding, Calif.; sons, Steven Morris, of Redding, Calif., and James Morris, of Susanville, Calif.; daughters, Susan Morris-Malin, of Scottsdale, Ariz., and Rebecca Swanson, of Corvallis, Ore.; siblings, Mary Wollschleger, of Mill Valley, Calif., Carol Babb, of Santa Clara, Calif., Shirley Wheelock, of Corvallis, Ore., Lois Herrin (her twin-sister), Norma Grossman, and Lowell Bud Ebnother, all of Medford, Ore. Also surviving are seven grandchildren and six great-grandchildren. She was preceded in death by her grandson, Joshua Morris, in 2008. Graveside services will be held at Memory Gardens Cemetery in Medford, Ore., on Friday, December 10, 2010, at 2:00 p.m., as well as an informal memorial gathering at Marquis Care Shasta, 3550 Churn Creek Road, Room #503, in Redding, Calif., on the same date. This will be a time for anyone who would like to stop by and share some coffee and memories with Doris's husband, Mike, and her son, Jim, since Mike is unable to make the trip to Medford due to physical limitations.

On Friday, December 3, 2010, in Redding, Calif., our family and friends tearfully but joyously released our precious wife, mom and grandma, Doris Eleanor Morris, from our worldly embraces into the eternally loving arms of her Lord and Savior,... View Obituary & Service Information

The family of Doris Eleanor Morris created this Life Tributes page to make it easy to share your memories.

Send flowers to the Morris family.