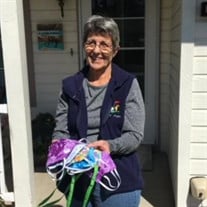 Connie Elfering was born the daughter of a Dutch immigrant father and first-generation American Sicilian mother. Connie had a charming, outgoing personality, and was much loved and respected in her community. She was raised in Vale, Oregon. Growing up on a farm, she became an expert horseback rider and even competed in barrel racing in rodeo. She also taught her younger brothers and sisters how to ride. After graduating Vale High School, she attended Treasure Valley Community College. She then attended Southern Oregon State College, which is now Southern Oregon University, and completed her bachelor's degree. After finishing her degree, Connie stayed in the Medford and Ashland areas and worked a variety of jobs. On the 4th of November 1972, she met the love of her life, and married her beloved husband Richard Moyer on the 17th of March 1973. Connie spent nearly 30 years as the director of religious education for Sacred Heart Parish in Medford Oregon, and also served as youth minister and led sacramental preparation. After retiring, she and a few close friends founded the Magdalene Home in Medford, which has sheltered nearly 300 teen mothers. In her free time, Connie loved praying, especially the rosary. She also enjoyed shopping, sewing, quilting, and camping. She is survived by her husband, two sons, four grandchildren, two brothers, and three sisters. A rosary will be prayed for her on the evening of January 20th at 6 p.m. at Sacred Heart Church in Medford. A funeral mass will be celebrated by Bishop Liam Cary at Sacred Heart Church on Friday, January 21st at 11 a.m. All are invited to attend. The family understands that at times like this it can be customary to send gifts or flowers or bring food to the house. Although these things are appreciated, instead the family would like to ask people to make donations of platelets, plasma, or whole blood to the American Red Cross, or monetary donations to the Magdalene Home.

Connie Elfering was born the daughter of a Dutch immigrant father and first-generation American Sicilian mother. Connie had a charming, outgoing personality, and was much loved and respected in her community. She was raised in Vale, Oregon.... View Obituary & Service Information

The family of Connie E. Moyer created this Life Tributes page to make it easy to share your memories.

Connie Elfering was born the daughter of a Dutch immigrant father...

Send flowers to the Moyer family.