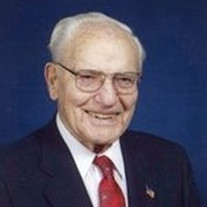 Carroll E. Brown, born December 8, 1907, was the last of eleven children born to Arthur H. and Martha E. (Tenney) Brown of Vancouver, Washington, passed away August 8, 2008, He graduated from Vancouver High School, attended Washington State College one year, and graduated from Oregon State College in 1933 with a degree in Forest Management. He received his civil service appointment in 1934 to the U.S. Forest Service in Rhinelander, Wisconsin, in the Civilian Conservation Corps, one of President Roosevelt's emergency programs, as a foreman. He later served as a Camp Superintendent in the CCC for two years and transferred to Pacific Northwest in 1938. He later served in various assignments on several National Forests, moving to Medford in 1957 as Forest Supervisor of the Rogue River National Forest. In 1935 he married Rita Marie Correa of Echo, Oregon, whom he met at OSC. They had two children: Barbara Guyll, Bellevue Washington and Lawrence Brown of Livermore, California, both of them surviving. Rita died in 1982. He later married Pearl E. (Orlick) Ward of Medford, who had five daughters, all of them surviving. They are: Carol Plowman, Portland, Oregon, Doris Anderson, Marysville, Ohio, Virginia Lindahl, Wichita, Kansas, Patricia Hildebrand and Janet Moore of Medford, Oregon. There are also many nephews, nieces, grandchildren and great-great grandchildren. During his tenure on the Rogue River Forest several notable accomplishments were made: The air tanker base at the Medford Airport was established, The Mt. Ashland Ski area and lodge was established. The Winema National Forest was created by the U.S. Government's purchase of the Klamath Indian Reservation and absorbing the Klamath Ranger District of the Rogue River Forest. The history of the Rogue River National Forest was prepared and the preliminary studies for creation of the J. Herbert Stone forest nursery, near Central Point were started. Carroll wrote two books: History of the Rogue River National Forest 1893-1932 and History of the Rogue River National Forest 1933-1969. After his retirement in December, 1967, Carroll worked for the Multnomah County Education District as Camp Director in their outdoor school program. He was active in the Good Sam Club featuring recreation vehicles and was an active Ham Radio operator for many years, with call letters K7PTK. In lieu of flowers, Donations may be made to The Children's Miracle Network.

The family of Carroll Elbert Brown created this Life Tributes page to make it easy to share your memories.

Send flowers to the Brown family.