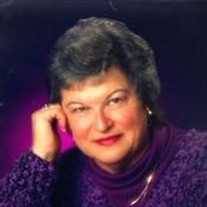 Beverly Warmington was born in St. Paul, Minnesota, on May 30, 1937. Her family moved to Corvallis, Oregon, in 1946, where she attended public school and graduated from Corvallis High in 1955. She entered Oregon State College and attended nursing school in Portland. She then worked as a nurse's aid in Eugene, where she met John Warmington in 1958. They married January 20, 1959, and this year celebrated their 52nd wedding anniversary. The family moved between Eugene and Grants Pass for the next few years before settling in Talent, Oregon, on Wagner Creek Road, where they would live for the next twelve years, until 1981. After her boys Curtis and Byron went off to college, the couple moved to Humbug Creek Road, Applegate, Oregon, where she lived until her death. Beverly loved living in rural southern Oregon, where the family raised dairy cattle, goats, free-range chickens, rabbits, and ducks, and the boys were active in 4-H. With the two boys in grade school, Beverly began working, first as a graveyard shift switchboard operator at A-1 Answering Service for about 5 years. She then was a switchboard operator for the federal offices, also in Medford. She had a lovely voice, which brought many compliments from customers. Beverly then took a position at the Bureau of Land Management, working first at the Holly Street location and then at the Biddle Avenue offices. She had many duties there, including working with timber bids. She was also the president of the local chapter of Federally Employed Women while employed at BLM, and she made many lifelong friends while working there. About this time, Beverly volunteered at Dunn House, a local shelter for abused women. She had long dreamed of owning her own business, and so she studied electrology at a school in Modesto, California. After graduation there, she obtained certification in Oregon and California. After working in California, she established her own electrology business in Jacksonville, at Fifth Street Hair and Nail Design, where she was an electrologist for nearly 12 years. She loved the work and the company of her fellow workers, whom she lovingly called "the girls." She retired from the business in 2005, when her vision and arthritis made the precise work difficult and painful for her. She was a member of the Oregon Association of Licensed Electrologists, and setting her business aside was a difficult decision for her, though she kept in contact with her coworkers throughout her life. Beverly was an avid reader of histories, biographies, and an occasional romance until the last couple of years, when reading became physically difficult for her. She was known for her support of many social justice programs. She was a long time member of NOW, and was thrilled to see Gloria Steinem speak; but at the same time, she was thoroughly devoted to family. She was a pioneer in the decades following the feminist era, helping to redefine women's role in American culture as both devoted mothers and career women. Beverly had a special soft spot for animals. She was a member of the World Wildlife Federation and the Southern Oregon Humane Society, among many others. Beverly will be always known and remembered for her trademark hugs, wry sense of humor, her ready laugh, and her loyalty to friends. She was a wonderful mother, and was devoted to family. Beverly died Sunday, May 22 at 9:40 pm at Providence Hospital, in Medford, Oregon, from complications resulting in respiratory failure. She is greatly missed by her husband, two sons, two granddaughters, her sister Rosemary, her brother Tom, and her beloved standard poodles, Tori and Pepper, as well as her extended family, loved ones, and all who knew her. In lieu of flowers, donations can be sent to the Southern Oregon Humane Society (http://www.southernoregonhumane.org/). A Celebration of Life was held for her at Guadalajara's in Medford on July 10, 2011.

Beverly Warmington was born in St. Paul, Minnesota, on May 30, 1937. Her family moved to Corvallis, Oregon, in 1946, where she attended public school and graduated from Corvallis High in 1955. She entered Oregon State College and attended nursing... View Obituary & Service Information

The family of Beverly Anne Warmington created this Life Tributes page to make it easy to share your memories.

Beverly Warmington was born in St. Paul, Minnesota, on May 30,...

Send flowers to the Warmington family.