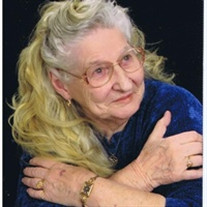 Betty Darlene Stone, age 82, of White City, OR., passed away unexpectedly at her home on Monday, Jan. 14, 2013. She was born Feb. 13, 1930 in Ashland, OR., to Maxwell Jay Hawks & Claudine Maggie Hart. In 1947, in Central Point, OR., she married Orville Gilbert Stone who preceded her in 1987. Betty had lived most all her life in southern Oregon with only a short time in Days Creek. She had been the bookkeeper at Medford Plumbing-Brooks Electric then later she and Orville owned and operated the McKee Bridge Mobile Park from 1980-1989. She and Orville were very active in the "Living Opportunities" program. Betty was a member of the Shady Point 7th Day Adventist Church. She enjoyed sewing, quilting, cooking and travel. She is survived by four children; son James L. Stone of Paradise, CA., son David G. Stone of Marysville, WA., daughter Carolynn E. Barkley of Sherwood, OR., and daughter Sherryll Bowman of White, City, OR., three sisters; Patrecia Duff of Vancouver, WA., Maxine Spangler of Winston, OR., and Sandra Schaecher of Medford, OR., 16 grandchildren, 29 great grandchildren and 4 great great grandchildren. She was preceded in death by a brother and a sister. Memorial services are scheduled for 3:00PM Saturday, Jan. 26, 2013 at the Shady Point 7th Day Adventist Church. Betty will be laid to rest beside Orville in Memory Gardens Memorial Park.

The family of Betty Darlene Stone created this Life Tributes page to make it easy to share your memories.

Send flowers to the Stone family.