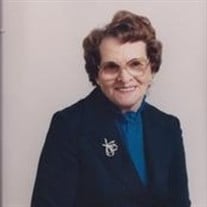 AnnaBell Smith, 92, passed away at Rogue Valley Medical Center with family by her side on Sunday, July 28, 2011. Born in Mena, Arkansas to Grover Cleveland and Nancy Jane (Reid) Barron on December 23, 1918, she was one of eleven children. She grew up in the Whitesboro/Talahina, Oklahoma area. AnnaBell loved to play basketball in her youth and her school team, the Whitesboro Bulldogs, won the Oklahoma State Championship in 1934. She was an avid hunter and fisherman and charter member of the Trail Dust Saddle Club which is still active in the Rogue Valley today. For many years she and the family lived in the Grants Pass area, relocating to Central Point in 1967. Smith's Arena in Central Point was home to many horse gymkanas in the 70's. AnnaBell worked as a cook at many food establishments and was known for her great pies and yeast rolls. She also owned and operated several family style restaurants. . Annabell is survived by daughters, Verda (Evan) Thumler, Lyn Conner, Laurie (Mike) Parent, all of Phoenix, OR; Marcy (Tom) Black of Central Point, OR; son, Charles (Frankie) Conner of Grants Pass, OR; daughter-in-law, Jerrie Conner of Poteau, OK; twelve grandchildren and over twenty great and great-great grandchildren. During her life she was Mom and Grandma to many others. She was preceded in death by her husbands, one son, one great grandchild and six siblings. A memorial service will be held at 1:00 p.m., Monday, August 1 at Memory Gardens Chapel, 1395 Arnold Lane, Medford, OR. Visitation will be Sunday, July 31, 12 noon-3:00 p.m. at the same location. Family and friends are invited to gather after the service at the home of her daughter, Laurie.

AnnaBell Smith, 92, passed away at Rogue Valley Medical Center with family by her side on Sunday, July 28, 2011. Born in Mena, Arkansas to Grover Cleveland and Nancy Jane (Reid) Barron on December 23, 1918, she was one of eleven children. She... View Obituary & Service Information

The family of AnnaBell Smith created this Life Tributes page to make it easy to share your memories.

Send flowers to the Smith family.